What is an Inverter Generator : Benefits & Working

In Brief: What is Inverter Generator

An inverter generator is a three-phase generator that produces AC power with the help of an alternator, and it is converted to DC power and then is inverted back again to AC power for usage.

An inverter generator is a device that could provide you power back-up during power outages, or you need extra energy to run some tools.

An inverter generator is relatively new technology and differs from conventional generators and, at the same time, offers many benefits which many users don’t know.

In this article, we will discuss how an inverter generator works along with its pros and cons and help you have a broad understanding of inverter models.

An inverter generator produces preliminary power similar to the portable or standby generators.

The fuels like natural gas, propane, and diesel are combusted and release energy when you start the generator.

This energy powers the motor attached to an alternator, which produces electricity i.e., AC power.

This AC power is raw, high voltage, multiphase, and has a high level of Harmonic Distortions (HD), which cannot be used directly.

After producing the AC power, the inverter converts the AC power into Direct Current (DC power).

The inverter has a microprocessor that is programmed to invert back this DC power to AC power again.

This process makes the inverter generator different from conventional ones. 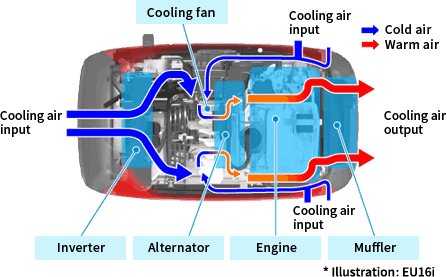 The resultant power due to inversion is smooth, stable, clean, single-phase, and is much safer for sensitive electrical and electronic devices.

The inversion also helps to maintain a constant flow of current in appliances because AC power is no longer in block waves but in clean sine waves with low HD.

In this section, we will let you some of the significant benefits of an inverter generator.

Conventional generators produce lots of noise when they are functioning, and this is a significant inconvenience for you and your neighbors.

Especially if you are running the generator unit at night, you can kiss goodbye to your good night’s sleep.

An inverter unit has an inbuilt sound blocking enclosures, mufflers, etc., which produces less noise around 50 to 65 dBA.

This range is much lesser than the noise produced by conventional ones and almost equal to an office noise, normal conversation, or the sound from inside of a running car.

Further, an engine running at a slow and steady speed as of an inverter generator produces less noise.
Due to low sound quality, inverter units are very comfortable to run indoors or outdoors at any time.

Most inverter generators weigh around 30-50 pounds, which is lightweight and compact compared to the bulky conventional generators.

Because of their compact build, you can easily transport and store inverter units. Inverter generator’s size increases if the load demand increases.

There are inverter generators that come in compact and lightweight models, which are much easier to carry around than portable generators.

But you should keep in mind that the compact models usually produce less power.

Because of this, the portable inverter units are a good fit for camping trips or outdoor recreational activities where you don’t need much energy than you usually do at home.

This is because inverter generators can regulate the speed of the engine according to the load at hand. Hence, it can run at a slower speed burning less fuel. 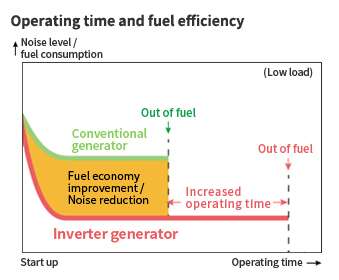 At the same time, an inverter unit can produce the same electricity without running the engine at 3,600 rpm all the time.

Thus, an inverter generator needs less fuel to run for the same amount of time as conventional ones leading to its high fuel efficiency.

On a rated load, a 2,000-watt inverter unit can run for nearly four hours using a gallon of fuel.

Conventional generators waste fuel if they are not used for long periods on full load.

This feature can be automatic or manual. It adjusts the motor speed as required and burns only the necessary amount of fuel needed to run your appliances without wastage.

In standard generators, the AC output is directly connected to the load without any processing.

But the inverter units use a rectifier to convert the AC power to DC, and capacitors help to smoothen out this output to some extent.

Further, the DC power is inverted back to AC at a desired frequency and voltage. This leads to high-quality output, i.e., the energy produced is clean, steady with low HD.

The output of an inverter unit is a pure sine wave, unlike conventional generators.

This high-quality output is often referred to as clean electricity and is often on par with the quality of your electric supplier.

This high-quality output is very safe to connect to your electrical quality sensitive devices like phones, laptops, computers, and printers, kitchen appliances, unlike unprocessed power produced by conventional generators, which might lead to malfunction or damage of such devices.

One added benefit of invertible generators is their parallel connection capability. You can pair one inverter with others to get more power output.

This way, you can use two small inverters to produce power equal to one large inverter unit.

Parallel inverter cables are used to combine the power of multiple inverters placed side by side or stacked. For this, the inverters need to be of the same model and build.

This parallel connection comes handy when your home power requirements increased, or your existing generator power output is not up to the mark.

This current or electric power is more reliable for sensitive electronic devices such as laptops and computers as they are vulnerable to harmonic distortions.

Further, electronic equipment will work more efficiently by using less electricity because of this inverted power and therefore increases the run time of the generator unit.

Comparatively, inverter generators are environmentally friendly as they have an engine that can run at different speeds and consume less fuel, unlike a conventional generator that runs at one speed using large amounts of fuels.

Limitations of an inverter generator

There are some downsides to the inverter generator when compared to the conventional portable generators.

In this section, we will discuss in detail a few key disadvantages of inverter models.

The purchasing price of an inverter generator unit is higher than a conventional portable generator, almost double the cost.

The sound attenuating, clean power output, and fuel-efficient features are the reasons behind this increased cost.

Just to give an idea of the costs, some of the most popular inverter generators (representative) prices –

Most of the inverter models available in the market can produce an output power of around 1,000-5,000 watts while other conventional units can give up to 50,000 watts and higher.

Because of this limited power output, inverter units cannot be used for the whole house backups and other tasks requiring higher power inputs.

Preferably, inverter generators are well suited for recreational purposes or to run a few small devices at home.

The smaller the inverter size, the lower the power it generates. With larger units, the weight increases, and the system becomes less portable.

A large inverter unit weighing 50 pounds or more can produce 5,000 watts of power or more at 220 volts.

You can directly connect these units to mains using a transfer switch.

A 50 to 60 pounds smaller unit can supply around 2,000 watts and are not sufficient for full house usage.

When to buy an inverter generator

If you are tired of the constant noise produced by your standard portable generator, it’s time for you to shift to an inverter unit.

Inverter units produce very low sound comparable to that of a normal conversation or a vacuum cleaner.

If you want a fuel-efficient and environmentally friendly model, you should consider buying an inverter generator.

Further, small-sized inverter generators are the best to meet all your camping or recreational needs as they are portable and lightweight.

More than anything, if you want a safe and clean electricity supply for your sensitive electronic devices, you should get an inverter generator as it produces clean, steady, and low HD power.

The parallel capability of inverters also comes handy if your house’s electricity requirements increased, and you don’t want to discard your current generator completely.

There are several inverter generator brands, but they are much lesser in number than the conventional generators.

Honda dominates the inverter generator market both in terms of innovation and quality. It has several models in this category.

They were the first one to develop microprocessor chip based inverter generators in the world. 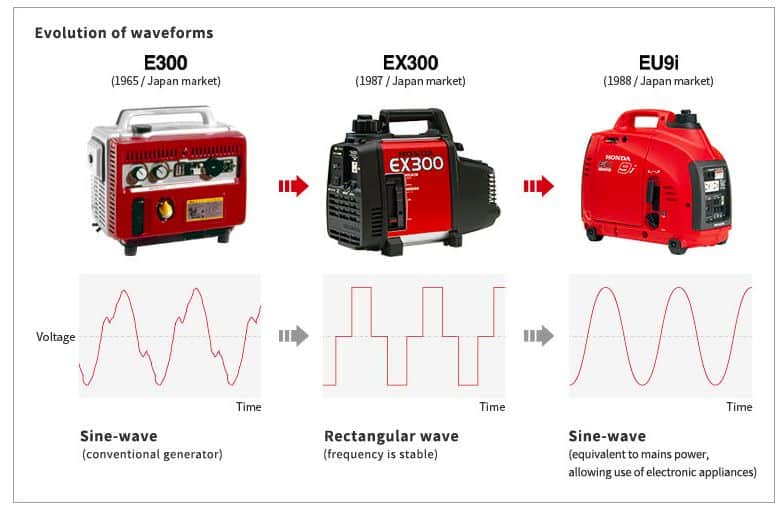 Other excellent brands in this space are –

Inverter generators offer you lots of advantages over conventional ones as they are quieter, produces clean electricity, fuel-efficient, safer and portable.

But they also come with their own set of limitations compared to conventional generators.

Here, we have done our best in explaining the functioning of an inverter generator along with its pros and cons, and we hope this helps you to get a better idea of inverter units if you consider getting one.

Anthony has vast experience in critically analyzing and writing on products and gadgets. He spends a lot of his time over internet tracking the latest tech developments. When he is not doing that, he can be found pursuing his love of gardening.