Bottle Jack vs Floor Jack : Which One is Right for You?


If you are looking for a jack for your vehicle then you probably know that two of the most popular types of jack are the bottle jack and the floor jack.

Which one of these you choose depends on a variety of concerns, so we have put this guide together to help you decide whether a bottle jack or a floor jack will be best for your needs.

Bottle Jack vs Floor Jack – How It Works

At a basic level, bottle jacks and floor jacks function in the same way. Both are placed under a vehicle and use a hydraulic cylinder mechanism to perform the heavy lifting.

The major difference in their design can be found in the orientation of the hydraulic cylinder.

While it might seem like a small difference, the consequences of the different orientations are wide-ranging and change a lot about how the jack can be used.

Bottle Jack vs Floor Jack – When To Use 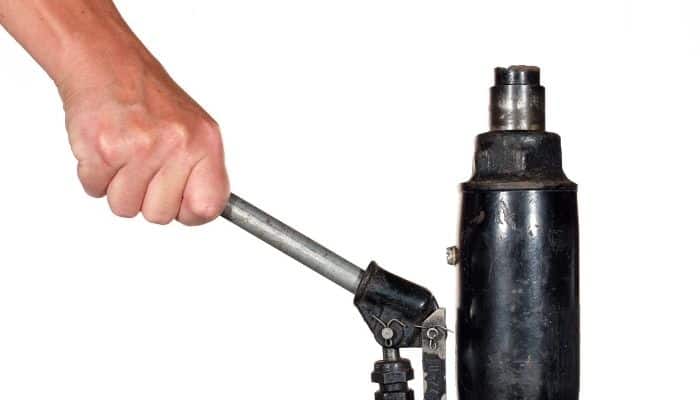 In short, you would use a floor jack and a bottle jack for the same applications. Either can be used for almost any job that requires a jack. However, there are some limitations.

For instance, a bottle jack should be preferred for lifting a truck or SUV.

They provide the extra power needed for the increased weight, and the ground clearance under a truck or SUV will be enough to accommodate the increased height of the bottle jack.

On the other hand, a sports car with a low ground clearance will not accommodate a bottle jack, so you would need a floor jack.

There are specialty floor jacks built with a low-profile design that suits even the lowest vehicles.

Bottle jacks have more power than floor jacks, relative to their size.

The extra power makes them a particular favorite of truck and SUV owners as a similarly rated floor jack will often be much larger.

If a bottle jack and a floor jack have the same cylinder size, then the bottle jack can produce more lifting power due to its vertical orientation.

That means that if you buy a floor jack then you will need to get one with a larger cylinder than you would if you opted for a bottle jack.

The bottle jack design also allows for lifts to higher elevations, which proves perfect for jobs that require getting under the vehicle.

One downside of the bottle jack design is the feasible lifting speed. Bottle jacks use a shorter handle that will need to be pumped more times to achieve the same elevation.

Floor jacks use a much longer handle, enabled by the horizontal design.

The extra leverage provided by the increased handle length means that you will need to perform fewer full pumps to get the floor jack up to the correct elevation.

If speed forms an important part of your requirements of a jack, then you should opt for the floor jack. However, unless you are using your jack all the time it will probably not be much of a factor.

The ground clearance of your vehicle plays a key role in determining whether you should get a bottle jack or a floor jack.

The minimum ground clearance requirements for a bottle jack can make them unsuitable for many types of vehicles.

There are bottle jacks that will work for a standard car, but most bottle jacks are suitable mainly for trucks and SUVs.

Floor jacks have a low ground clearance requirement as standard, which means that a standard floor jack will almost certainly suit your car no matter the make and model.

For cars with a very low ground clearance like sports cars and luxury sedans, you will want to opt for a floor jack with an ultra-low profile.

Bottle jacks lack the stability of floor jacks due to their vertical design.

The narrow frame of a bottle jack means that it has a relatively high center of gravity, which makes it more liable to tip.

Floor jacks, on the other hand, have four points of contact with the ground and utilize a much wider base which brings its center of gravity closer to the ground. The risk of tipping is therefore much lower with a floor jack than a bottle jack.

Whichever type of jack you use, ensure that you follow all safety guidelines to maintain stability in use.

Loss of stability can mean your vehicle crashing to the ground, which at best will damage your vehicle and at worst could cause serious or even fatal injury. 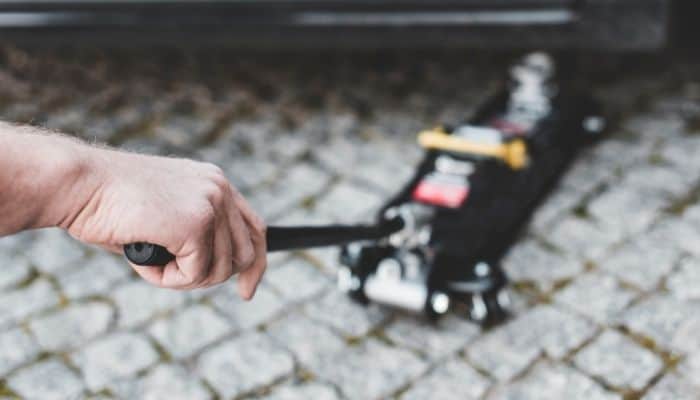 Bottle jacks are more compact and lightweight than floor jacks.

One of the main reasons truck and SUV owners prefer bottle jacks over floor jacks is that they can be packed away into a small cubby or similar space within the vehicle itself. Should you be out on the road and in sudden and unexpected need of a jack, you already have one with you.

Floor jacks have a much larger size profile for comparable lifting power. It will be difficult to transport a floor jack around with you, especially if you are using it for a compact or sub-compact car with little storage space.

The same points hold for the storage requirements of bottle jacks and floor jacks.

A bottle jack will take up far less storage space and can quickly be put away in a small cupboard, under a workbench, or wherever else you would like to store it.

Storage within a vehicle is feasible for a bottle jack.

A floor jack will probably need its own dedicated space for storage.

It will not easily fit onto a shelf or into a cupboard, so ensure that you look up the dimensions of any floor jack you consider and plan out where you would keep it before you commit to buying.

Bottle Jack vs Floor Jack – Ease of Use

Both bottle jacks and floor jacks are relatively easy to use compared to the other tools you will already be familiar with.

However, floor jacks trump bottle jacks in ease of use for several reasons.

Floor jacks have a longer handle, as mentioned previously. You will need fewer pumps to get up to the right elevation with a floor jack.

They also have caster wheels, so can be repositioned quickly and easily, and transported around the garage or shop with ease.

The extra stability also means that you have a larger margin for error when it comes to safety.

There are many different floor jack designs available on the market with a variety of power ratings, elevation heights, minimum heights, and handle lengths.

With the sheer variety of floor jacks, you are almost guaranteed to be able to find one that is right for you.

On the other hand, bottle jacks are far less ubiquitous and therefore there are only a few different features and options you have when buying one.

Bottle jacks are universally cheaper than floor jacks. The price difference is not small.

A good quality floor jack will cost you at least $100. If you need one with special features, or you just want a higher-end model, you could pay far more than that.

On the other hand, even high-quality bottle jacks usually cost less than $100. Many cost significantly less than $100, so if you are looking to save some money then you should opt for the bottle jack.

Either way, neither design is prohibitively priced.

What Is A Bottle Jack?

A bottle jack is a car jack with a vertically oriented hydraulic cylinder and a hand pump operated by a short handle. They are sometimes referred to as whiskey jacks, which is a play on the term “bottle”.

They are used to lift cars ready to be put on axle stands so that you can work on the underside of the vehicle.

What Is A Floor Jack?

A floor jack is a car jack with a horizontally oriented hydraulic cylinder and a hand pump operated by a long handle. It sits on four caster wheels and maintains a low profile to the ground.

They are used to lift cars ready to be put on axle stands so that you can work on the underside of the vehicle.

Floor jacks are stable, easy to use, and suitable for vehicles with low ground clearance.

We hope this guide has helped you to understand the main differences between bottle jacks and floor jacks.

Now that you know what both of these tools do, you can make a buying decision with peace of mind.

If you have any questions or comments about this guide or carjacks in general, please feel free to leave them in the comments section below.

Ryan has more than ten years of experience writing about power tools. He is an expert in the field, and is able to provide unique insights into the reviews, use, and maintenance of various products. He enjoys cooking when he's not working on his articles, as well as spending time with his dog.